The local Organizer of the ICCHMT2016 Conference is the Institute of Thermal Power Engineering from Cracow University of Technology.

Other hotels located nearby the conference venue include:

Cracow is one of the most beautiful cities in Europe. Numerous tourist attractions e.g. Cracow monuments and rich cultural offer of the city have been appreciated worldwide. In 2005. Cracow took 5th place on the list of the most interesting cities in Europe, prepared by the prestigious magazine "Travel and Leisure". However, in 2006. American agency Orbitz castle Krak recognized as the most fashionable in the world. Cracow is the administrative centre of Malopolska and one of the most important centres of the economic, scientific and cultural country. Until 1795. Cracow was the official capital of the Polish, and remind us that in numerous monuments.

For centuries the Main Market Square was the main commercial and administrative center of Cracow. Today, around the largest medieval square in Europe thriving social life, and such a disc Market is the perfect venue for holidays and occasional fairs, as well as various festivals and concerts.

Wawel is located on a hill overlooking the Vistula River. It is particularly important that the historical reasons, was the seat of kings, and the burial place of many Polish celebrities. Legend has it that in prehistoric times at the foot of Wawel Castle in the cave lived predatory dragon who terrorized local people until ingenious cobbler tossed him to eat lamb stuffed with burning sulphur.

Jewish Quarter is next to the Old Town, the most important centre of cultural life in Cracow. Kazimierz is the place where Christian tradition intertwined with Jewish tradition, where next to the ancient Jewish synagogues and typical restaurants coexist with modern cafes and clubs. Here blooms also the social and cultural life of the city. Alchemy, Singer and Les Couleurs is a truly iconic place. Jewish Culture Festival, Festival of Soups, Bread Day or the Feast of Joseph Street attracts crowds of people every year. Although the historical centre of Kazimierz Wolnica Square, which is proved by Hall of Kazimierz, this life is mainly focused around Plac Nowy, also known as Jewish.

Church of the Virgin Mary is located in the north - east corner of the main square. The diagonal alignment with the axis of the market shows that the first Romanesque temple was built in this place before the foundation of the town (1257 year). The current three-nave basilica maintained in the Gothic style was built at the end of the fourteenth century. The chapels were built in the fifteenth century. Afterwards, the main body of the church has changed slightly over next centuries.

Standing in the middle of the Market Square, the Cloth Hall is one of the most typical sights of Cracow. As in the past, this building meets primarily commercial, but now instead of visiting Cloth merchants primarily tourists. Beneath the Cloth Hall exists the created in the modern style the underground Cracow Museum. 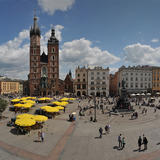 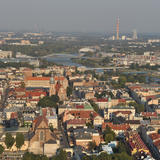 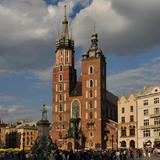 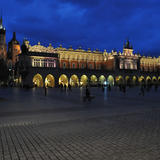 This website uses cookies to allow the registration of event participants and service related processes. By using this site you agree on the use of cookies according to the current browser settings.
Accept